OH my god. Kids are the absolute worst. Seriously. This woman is a bus monitor who gets paid $15,506 to monitor some of the biggest fucktards on the planet. And they berate her by calling her fat and poor. Way to respect your elders and thank them for looking after your safety, kids!

I’m so glad for the internet. A) Because society as a whole can shame the kids who are making fun of an old lady. B) Nice people understand she has a lame job and needs a vacation.

You know what, I understand that parents can’t control absolutely everything their kids do. But seriously? Being disrespectful to the elderly is right up there with animal sacrifice and hearts made of coal. This is a problem.

Moreover, anyone working with shitty fucking kids should get paid. A LOT. MORE. Because kids are shitty (especially the shitty ones) and they don’t know anything. Fact.

There’s power in the people, fighting the good fight. Some good news in a world of bad. A mother’s home was saved by protesting and getting Citibank to commit to loan modification. It seems lame to thank Citibank, because taking peoples’ homes away after giving out a bunch of terrible-idea loans over the past decade seems like a wholly dick move, and it is. Thankfully someone with half a brain over there in the banking industry did the right thing in letting this woman pay back the loan instead of taking her house.

Click the link to read the whole story below. YAY!!!

This shit is so fucking good. Pocahontas is so wise. Can you imagine this song being in any children’s movie nowadays? Those bigoty losers over at One Million Moms (more like one million shit bombs) would probably deem it inappropriate. I don’t know why, but crazy bitches can always find something wrong with anything. I don’t know about you, but right-wing, religious, bigoty nuts who probably have their own “Bleach Your Asshole At Home!” kits are not my cup of tea.

These are the same bitches who got mad at JCPenny for hiring Ellen-ELLEN- to be a spokeswoman for their half-assed brand. How can anyone who isn’t the most evil person alive not like Ellen? Seriously. Think about it. She dances! She wears Keds! What’s not to like? Fuck them. Pocahontas and Ellen are the baddest gals in town.

Also, can somebody start an activism group called “One Million Toms” that’s just a shit ton of gay dudes half-nakedly dancing to episodes of Ellen? They can call whomever OMM is protesting that week and ask for the opposite. “We LOVE the sexually explicit content on your primetime show. More nipples and bare ass plz!” PLEASE make this happen, anyone with time and money for activism, and preferably the first name Tom.

Vidal Sassoon beauty, pixie cut forager, Woody Allen muse, Woody Allen muse, Frank Sinatra’s ex (she was 21, he was 50. WHAT THE WHAT!!!), humanitarian activist and film icon. I read once somewhere that she got so sick of fame and acting that she gave all of her money away to starving children somewhere. #thatshitcray

She’s a UNICEF Goodwill Ambassador who focuses on fighting child hunger and tirelessly posts on her Twitter about all the injustices in the world. Someone needs to send this girl on a vacay, stat.

She’s also adopted many children throughout the years, along with having children biologically with husbands here and there. Possibly her most famous family drama was when she discovered that her then husband, Woody Allen, was having sex with her adopted daughter from a previous marriage, Soon-Yi. That story will never not be creepy.

Nevertheless, Rosemary’s Baby is a frightening and amazing film, her bone structure let women everywhere feel confident about short hair and it’s always nice to fight for the rights of people who don’t have a good leg up in this world.

Where’s that reality show, MTV? Let’s inspire the youth of the nation, instead of making them believe if they’re sixteen a pregz they can get a tv show and make money off being an F-list celebrity magazine star.

Check out this video of Tavi Gevinson giving a TED Talk on “figuring it all out” as a teen girl.

What a smart, cool kid. These websites, thestylerookie.com and RookieMag.com, are awesome and makes me jealous they weren’t around when I was a teen. Being a teen sucks, but having a place other than the regular  psychotic teen mags (Seventeen, Cosmo, etc) to read about growing up and “figuring it out” is pretty rad. 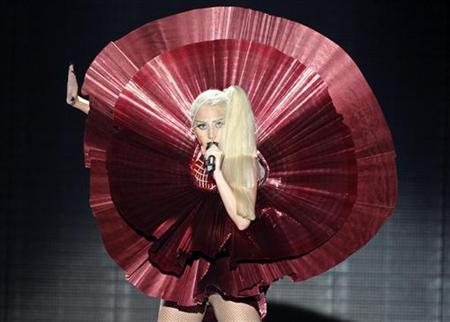 Yay Lady G. I like to read her Born This Way Foundation as “Kids and teens are assholes, let’s help them out to not be.” She says it much more eloquently. Check it out.

BBC News – Viewpoint: V for Vendetta and the rise of Anonymous.