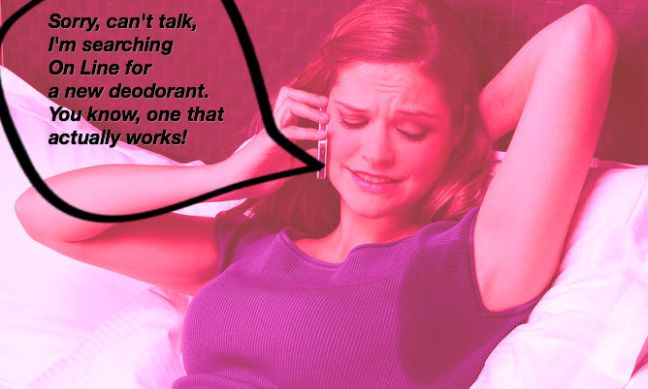 I am a sweaty person.

Not like, dripping-from-my-forearm-in-an-air-conditioned-room kind of sweaty, but more like sitting-on-the-couch-in-a-moderately-warm-living-room-armpit-sweaty kind of way. It’s annoying as fuck.

Trying to find a deodorant that works–and one that is not also an anti-perspirant–has been impossible. Those deodorants, in my experience, are made for people who don’t sweat much at all and enjoy the routine wallet masochism of buying useless products. I have never smelled worse in my life than when I tried Tom’s deodorant. I even talked to some actual, real-life hippies about the stuff, and even they were like “Oh fuck no, Tom’s makes you smell worse.” And it really does–more so than if you had put nothing on at all.

So in my sad search for a deodorant that isn’t a complete waste of time and money, I’ve just been using the regular anti-perspirant that’s filled with aluminum. (I’m not an organic-everything purist, but some studies over the years have linked to Alzheimers and traces in breast cancer. Although they’re not conclusive, it’s still something I consider when looking at shit that’s going on my body.)

Since gaining a nice boyfriend in the past two years–and seeing him leave behind important things like a toothbrush, a pair of socks and (fuck yes!) extra snacks–I’ve discovered a huge beauty secret that men have been hoarding for millenia: Old Spice deodorant.

I decided to try out his Old Spice because I was feeling very gender fluid and carefree that day. I slapped it on and was amazed hours later when I wasn’t sweating profusely or smelling like I just took a bath in the juice of a big, ripe onion. Now, nearly two weeks later, I still am not smelling gross and am defintely feeling like this deodorant works great. I’m hypothesizing that it might be the alcohol-based formula that is the pop star ingredient here, as it’s not found in many other deodorants.

One big question I had after my great discovery in stealing my boyfriend’s shit: why don’t they make an Old Spice for women? Are they afraid we will all turn into the literal Old Spice, the secret 6th member of the Spice Girls who was cut right before recording their debut album?

I was considering writing them and asking why they didn’t have a girl version because it’s been working for me so well. And then 2015 hit me and was like, girl wear whatever the fuck you want, you don’t need a gendered version that costs 36% more and doesn’t even work!

It would be great to see the Old Spice brand move towards a more gender-neutral advertising campaign since their product is the best deodorant I’ve ever used. After all, gender is kind of boring and whatever conglomerate makes Old Spice could really cut down on costs having to make a bunch of shitty products for the opposite sex when they could just focus on one great deodorant for everyone. Until then, Imma keep stealing my boyfriend’s Old Spice and appropriating this awesome man deodorant/scent for myself. I urge all self-proclaimed sweaty bitches to do the same!