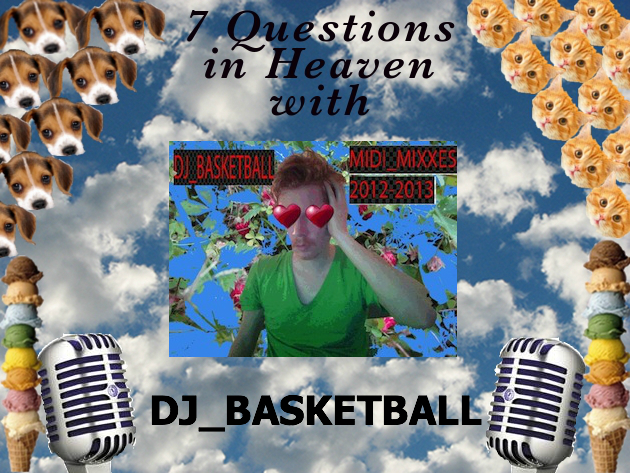 I met DJ_BASKETBALL on Twitter after a friend of a friend told me that if I like funny and weird, I should definitely follow @focra. We became Twitter friends, and then he told me he was releasing his album of midi covers sometime. THAT SOMETIME IS NOW. DJ_BASKETBALL sat down at his computer last week and answered all my questions for your reading pleasure. HERE IT IS. Download his album MIDI MIXXES for free here and WELCOME TO THE TECHNICOLOR WORLD OF DJ_BASKETBALL.

1. Describe your new album in 3 emoticons.

Emoji ghost (I like the android one better than iOS tbh,) cat smiley :3 and probably the o___o

2. Why is your name DJ_BASKETBALL?

I was talking to a friend online (and I guess I’ve only known him online, so) and we were spitballing DJ names.  DJ_BASKETBALL was one of mine and it stuck.

3. If you could pick any actress to live in a world where your music was the constant soundtrack, who would it be and why?

Maaaaaan.  Uh.  Emma Watson and / or Christina Ricci because they would probably “get it.”  But I’m probably projecting.

4. Who is your favorite pop star and why?

I thought about this one a whole lot and I think I’ve settled on Nicki Minaj.  While she hasn’t really been around to stand any test of time, I appreciate her vivid, up-front persona.  I like the fact that it doesn’t come off as forced, or manufactured by anyone outside of herself, but I’m sure many would disagree.  (Haven’t caught her on American Idol because I don’t think I’ve watched American Idol in years.)

5. Why did you pick the songs you covered for the album? Which one is your favorite?

Just naturally drawn to all of the songs.  The process was disappointing sometimes, because some of them would just turn out to be poorly made / orchestrated MIDI files, but these made the cut on that front.  With that in mind, I think that OVENS and BENNIE_JETS are my personal favorites, because they’re the most dynamic tracks.

6. You are also a chapbook author by your IRL name. Give an excerpt of your favorite chapter.

this is from my first chabook, and I usually make it a point to read this out loud:

courtney love is tap dancing somewhere, at some point in time
robert rodriguez is channelling someone distant
during the penultimate refreshor other kinds of archiving gmails
i call out a really
i want to get powerfully drunk with you for only five minutes
i want to climb on top of a building and be very scared
during your life
and about it
there was a boring synchronicity of costco memberships

7. You’re ALSO a visual artist. Describe what you listen to/drink/eat/scream when you’re drawing alone in your apartment.