EW. Holy shit. The 2013 MTV Movie Awards were not a great compilation of fashion this year. Not to mention the fact that I know I’m getting older, but who the fuck are most of the people on the red carpet?! My guess would  be B-list “teen” celebs from MTV original shows (lol) and the CW.

Legit, the only person I say who looked amazing head to toe. He’s so fucking handsome. And you can also tell he’s not a total piece of shit because he A) dresses himself and has great personal style or B) has enough brains to have a stylist. A+ Taylor!

Okay. So, if Macklemore is going the pop artist route in mainstream society, then I owe him a congratulations. He wore something weird that will get the media talking. If I may deconstruct the outfit a bit, it feels as if the black tie and shirt underneath the blue suit is kind of grounding him, or serving as a reminder that he’s a “regular guy” with an eccentric shell. The cape is kinda fun, the hair has a style and shape, and he doesn’t look like a total hot mess. The shoes are horrid though.

I feel for men because there aren’t a lot of options or opportunities to be really creative with fashion without looking like a jag. He gets a B+ for effort. 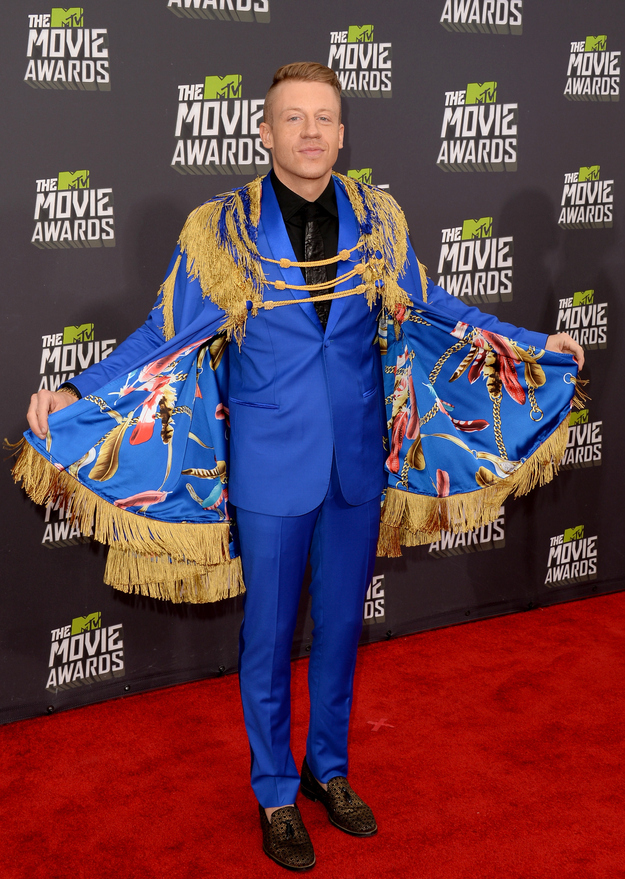 She is definitely a cute bitch. Her hair looks fun and she’s got a pretty smile. But overalls are not okay. EVER. And oh lord, that bag. Is it underwear? Is she carrying lipgloss inside of theoretical old butt stains around on a red carpet? Honey, no. 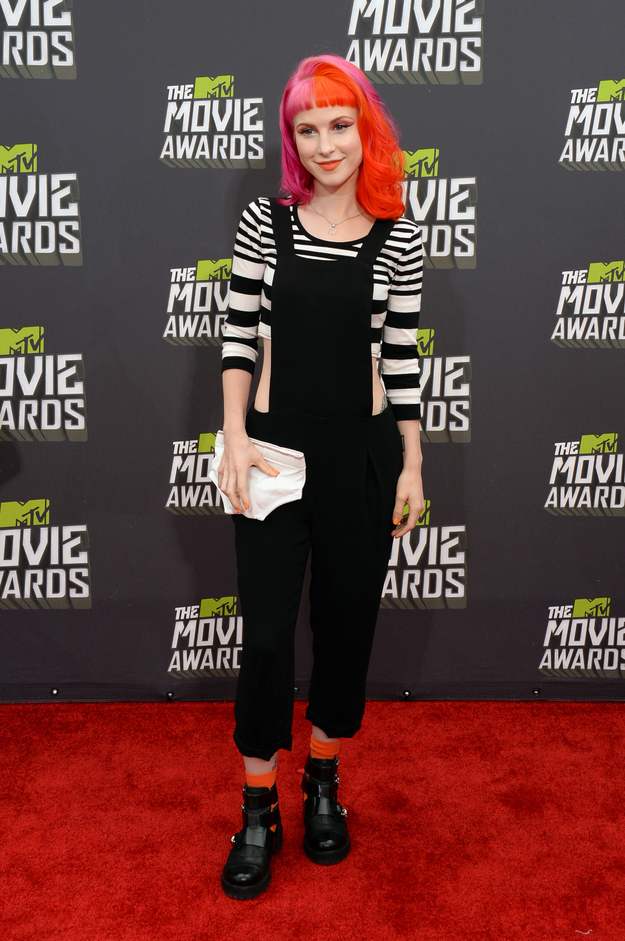 What the fuck is that? OH! It’s a cigarette butt. Cuz people should stop smoking? Woulda been a cute look otherwise, but then nobody would be talking about it or her. Clever publicist, but stupid, stupid outfit. 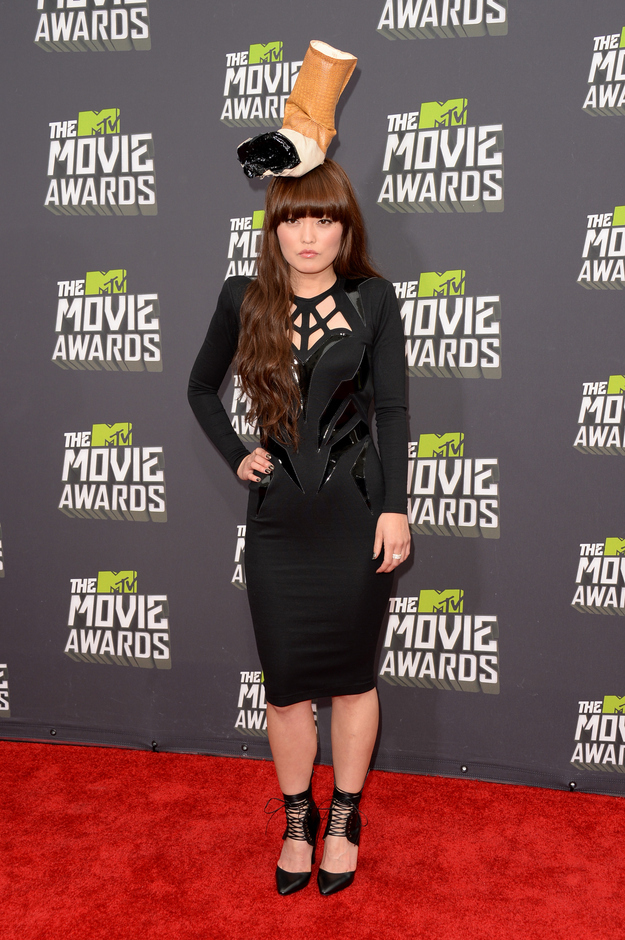 GO TO HER WEBSITE. WATCH AND LISTEN. WHO SAID THIS WAS A GOOD IDEA? Oh, dear God. The crash and burn of this new Ashlee Simpson album is going to be insane. There’s a countdown on her website. Last time I checked, anyone my age who listened to Ashlee Simpson in the confusing days of high school does not ever listen to her anymore. Not even as a joke. This girl is so uncool that nobody would even be listening ironically (i hate that sentence, but you know it’s true).

EVIDENCE this will blow

She got caught lip-synching on SNL (which is the first thing that pops up on youtube after you type her name in), and by the way it is painful every time to watch. She used to have a reality tv show on MTV. She was married to and then divorced to Pete Wentz from Fall Out Boy who hasn’t really done anything musically in yeeeears. She had a baybay. Two years ago, She was rumored to be working on a folk album. A FOLK ALBUM. A nose job, a short haircut. WHO IDENTIFIES WITH YOU. She seriously might be a sociopath. Think about it: if she was actually cool, then she’d know that she isn’t cool. The more you know.

Oh, Teen Mom. The infamous show detailing the struggles of teen moms from very small towns no one has ever heard of. The teen moms showcased in the show have so many problems it almost seems rude to film them and expose all their problems. But then again, maybe other teens learn from it. Let’s examine Teen Mom.

The show does show how terrible these teen moms’ lives are. If anything positive can be gained from Teen Mom, it’s that having a baby in your teens is awful and makes your life super shitty and no fun. And teens need to see that, because it ain’t glamourous. +5

The girls from the show are falling in lust with fame-and it is not being kind to them. Amber Portwood is in and out of jail for things as serious as assaulting her child’s father. She just recently avoided 5 years in prison over drug charges and will be going to rehab and a halfway house. Teen mom Leah, with two twin girls, cheated on their father right before their wedding, got divorced, got engaged again and pregnant again, all to have a miscarriage. Now it’s been reported that she wants to be a pageant mom. Reality show overload. Oh, and Jenelle is a terrible mother with drug problems and general disrespect for her mother, who is raising her child. –25

They make 6 figures from MTV. Good for them, but bad for their behavior and lifestyles. -5

Instead of, you know, saving the biggest paycheck of her life for her future and, God forbid the future of her child, teen mom Farrah got a boob job. -10

The teen moms get way too many covers on the gossip rags. Bleg. Let’s keep it to real celebrities. I’d rather be depressed at how much the Kardashian’s make each year, instead of reading about how someone is neglecting their child for fame. -3

Maybe their stories are prime examples of why health class NEEDS to talk about something a little more than abstinence. Teens are idiots living in bubbles, they know nothing. +2

I guess the gals from Teen Mom tie Chris Brown for the lowest ‘On the fence’ score. What an honor! The only positive I can find in Teen Mom is that these girls serve as a warning to other teens who are thinking about sex and having a baby at such a young age. Plus, the guys they “love,” date and unfortunately procreated with are total losers and terrible fathers too. The teen moms’ drug problems, anger control issues and lust for the spotlight are all despicable qualities, even for a reality show.

Remember when boy bands were the absolute biggest stars in the world? Millions upon million of records sold, girls and women crying their souls out to touch them, see them, and possibly even trample them to death.

Well, one of our favorite mock boy bands, 2Gether, is poising for a comeback.

They had a couple of hits that I remember singing in middle school with my friends nonstop: “U + Me = Us (Calculus)” and my personal fave “The Hardest Part of Breaking Up“. The songs were actually written by the same song writers and producers that who worked with N*SYNC and the Backstreet Boys. They even opened a couple shows for Britney Spears, which is really, really awesome.

If you think about the absolute sad people MTV has on the air these days- Jersey Shore, Teen Mom, Friendzone – the 2Gether reboot doesn’t sound like such a bad idea. Plus we are sorely lacking in the self-aware boy band department these days. This could be the genre to save us from recession! Ha.

Four of the five original members are taking over the show and band after getting permission from MTV to restart 2Gether. Michael Cuccione, who played Jason ‘Q.T.’ McKnight, sadly passed away after a long-term lung complications from battling Hodgkins lymphoma as a child.

The remaining members plan to donate large portions of profits to the Michael Cuccione Foundation for Childhood Cancer Research if the new projects are put on the air.

Let’s hope for the sake of nostalgia and programming on MTV that this reboot works out. Take a walk down memory lane and check out the video for “U + Me = Us (Calculus).”

Lana Del Rey is bursting onto the music scene this year with a hot new song, “Video Games,” and not-so-hot performances on SNL. Although she hasn’t interviewed post-SNL snafu, she did talk with MTV before the performance saying that she doesn’t like live television:

“You can’t expect too much from my show,” Del Rey said, explaining that her real fans are probably aware that she’s more of a songwriter and studio musician than performer and that she thinks people who come to see her show are really just there to hear the songs they already like.

“Sometimes I feel less nervous than other times,” she added. “I don’t love live television. The only tip I have is just pray and just hope that things work out,” writes Gil Kaufman on mtv.com.

Bad performances happen, especially when you’re first starting out. Her fans are really enthusiastic about her upcoming album, Born to Die, which is set to be released January 31, 2012 in the States. Her 60s-vibe album is a breath of fresh air in a world that unfortunately hasn’t had enough of LMFAO’s “Party Rock Anthem.”

Her style is great, and her hair is f-ing gorgeous to the point where it looks like a wig. She needs to share her shine tips like NOW.

Listen to this video. It is another live performance, filmed in a swanky hotel, that is miles above Earth better than her SNL debut.

In the words of Liz Lemon, “what the WHAT?!”

While browsing Perez this morning, I came across a post that says Tucson schools are banning books that discuss race. P writes “Later administrators told Mexican-American studies teachers to stay away from any class units where ‘race, ethnicity and oppression are central themes.'” OMFG.

Maybe the unreasonable and censorship-happy Arizona lawmakers are banning themes of oppression so Arizona students don’t notice that oppression is exactly what is going on in their state in terms of immigration laws.

It’s so confusing as to why anyone would support not talking about race, especially in a state where race issues and tension seem to be very, very high. What this state needs more than anything is cultural and historical understanding between the races, not completely denying students the right to learn about race in America.

This news however is not surprising given the past racism and general jerkheadedness that seem to live and breed in AZ. Last month, a video hit youtube that was posted by some highly racist teens in Arizona that blasted “illegal immigrants and Mexicans” as being less than human as well as other truly horrific things. Check out the terrifying video here if you haven’t seen it before: Arizona Racist Teens.

America needs to have a little state intervention with Arizona. Maybe it could be a new reality show on TLC: “All American Racist Intervention” is a good start. I’m absolutely serious. What’s the difference between exploiting alcoholics and Teen Moms that make themselves look nuts on TV (cough, cough MTV) and exploiting racists by schooling them on how to not be total poo-poo heads?