Um, YES FOR THE LOVE OF GOD PLEASE. We could all use some more Jonathan Ames & co. You can never have enough Ted Danson/Zach Galifianakis sidekick action. NEVER!!!!! Plus, the love between these three male friends is such a unique take on male friendships in general. It really shows that dudes aren’t just obsessed with pussy or trying to fight some ugly dudes over chicks that don’t care 24/7. Unlike Entourage, ew. Those guys are grade A beef farts.

Instead of living disgustingly bleak lives ourselves, we get a beautiful chance to live vicariously through other 20 somethings going through similar/worse problems that us. These are the days of Girls. (And we get to wait to find the new episodes on the internet, or a friend living with parents who have HBO! Exciting!)

Episode 2 of Girls is just as bleak as the pilot. Jessa needs to get an abortion, but flakes because it’s either scary, she doesn’t care, or she can feel the impending miscarriage happening. White russians + boys who call their mom are apparently the new coat hanger. The boy she’s making out with is directed to her underpants when the aforementioned miscarriage luckily appears.

And to those who haven’t vaginas, let me tell you that they can indeed be panicky. The episode has a panicked feel that is unsettling, but vagina worries are no laughing matter, especially when one of those matters could turn into a child.

While Jessa is buggin’ about abortion shit, her friends all wait at the abortion parlor (I’ve always wanted to call them that. They should serve ice cream there). Marnie is annoying because she hates her nice boyfriend and likes to be on time, while Hannah is having weird, plot-ty sex with her less-than-amazing sexual partner. Who, by the way, is the embodiment of the boyfriend or fuck-buddy of at least one of your girlfriends who could totally do better.

Lastly, Shoshanna, the chatty, perky one, reveals that she’s a virgin and shocks absolutely no one.

The episode, steeped with mediocre sex and abortion kerfuffles seemed like it ended an hour too soon. Maybe it’s a symptom of watching Tiny Furniture a couple of times, but I just expect to watch Lena Dunham for more than 30 minutes. I’m seriously considering not watching this show until I can watch all of them in one, amazing, Panera Bread-coma filled day. 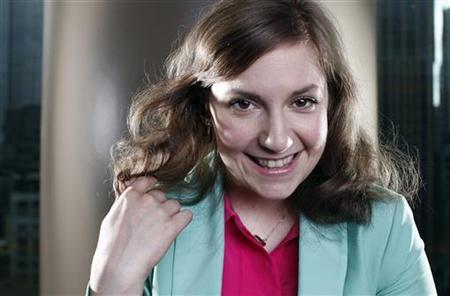 “Some of it was versions of things that happened to me and things that happened to my friends. I did once drink a tea made of opium pods,” Dunham said, referencing a plot line in the first episode. “It was the most pathetic attempt at a drug experience that anyone in their early 20s has undertaken.” Lena Dunham rocks and this show is gonna be amazing.

As I already blogged, I am super excited for HBO’s new series “Girls” starring creative triple threat Lena Dunham. The new Sex and the City except I’m guessing way less fabulous and way more anxiety-ridden “where is my life going” and “why aren’t they paying me for work,” with the same amount of “why didn’t he call me back?”

So when it comes to ratings and keeping this hopefully awesome new show afloat, I’m not sure if their 20 something demographic is going to be reached at all. Sure, people are super excited about the show, but they’ll be excitedly streaming it from some Eastern European website since HBO doesn’t stream their episodes either.

I almost feel like it’s going to be a one season wonder, or maybe two, like our fave Party Down. Sometimes it’s better to have a short series because then it doesn’t get drawn out like the shit hole that is The Office, Two and a Half Men, Family Guy, you name it. But still, this series looks awesome. Let’s hope there’s more than one season and that people with money and HBO watch the show!

UPDATE: Maybe all the kids/20 somethings forced to live at home with their HBO-subscribed parents are who HBO is banking on watching. Let’s hope so, because there’s a lot of ’em! Thanks, economy!

This shit is gonna by SO FLY. Mid-20s, poor and fabulous. Ring a bell?! Lena Dunham is the chick who wrote, directed and starred in Tiny Furniture, which is basically the same premise of Girls, as it covers the same topics (20 something strife and living in New York City) and a couple of the same characters.

What I love about Lena is that she looks like a regular gal pal that you’d get drinks with, that would turn into being wasted on like, a Tuesday. But you’d have some really great conversations with even though you’re both kind of lost and confused about life. It feels a little bitchy to say she looks like a “regular gal,” but it shouldn’t. I just mean that she does not look starving nor perfectly formed from a surgeon’s table.  So many tv shows and movies just feature gorgeous human beings who are so unbelievably not human in their roles. J.Lo, anyone?! It’s refreshing and infinitely more interesting to watch people, as opposed to “stars” tell us stories. Nobody relates to J.Lo. People can relate to Lena.

As a 20 something gal, I’m super excited about this show. After all, it’s always fun to watch something that is frighteningly relatable to your current life situation. Dating, unpaid internships, never having any money, growing out of friendships and making new ones, etc.

Watch Judd Apatow interview Lena here. She describes the show as that time when you’re not a girl, but not yet a woman. And yeah, she name drops Britney. LOVE IT.

Also, jealz!!! I, along with EVERY 20 something of our generation, wants to be on this show. I hope they come out with contests and shit. Or if the show goes on for a couple seasons, we’ll have to make a pilgrimage to NYC to be an extra on the show.

Olivia Munn responds to alleged nude photos of her that were leaked:

Dear Everyone at “The Babymakers” SXSW screening:

I’m sorry I couldn’t be there with you all. I’m currently in Sierra Leone helping build wells for the thirsty. I thought I’d have time to stop through Austin on my way here, but I was detoured when I saw two beached seals on the Gulf near South Padre and used all of my strength, sweat and tears to pull them back into the water and save their lives.

(NOTE to JAY- Hold for applause and gasps. About 2 solid minutes…)

So, I come to you only in this letter, by way of my director of “The Babymakers” Jay Chandra-shay… shay- Jay Chandra-something.

It’s hard for me to sit here with these small, dysentery-ridden children and know that I cannot be there, with all of you wonderful friends and supporters, for my SXSW Hollywood movie premiere.

I must end this letter short, as I’m on my way to Seoul, Korea to speak with the starving children who have been denied food by their country and educate them on a motto that I have personally lived by and think will give them some hope: Thinner is Better.

I pray this letter finds you well and God keeps you safe.

Oh, and one last thing- Some of those pictures weren’t even me. I mean, you can’t even see my penis… and it’s pretty big for an Asian. Sheesh.

Til next we meet again…

Love her!! Hot and funny is the coolest combination ever. Just ask Kristen Wiig.

Bored to Death is my male-counterpart dream life realized.

As a child, along with half of Nickelodeon viewers in the 90s, I was obsessed with Harriet the Spy. I used to sit in trees and spy on my boring, old, yet nice neighbors, hoping for something exciting to happen. I even had a makeshift spy kit: My dad bought me special binoculars, I used a foldable mirror from Claire’s to spy around corners and I wore my notebook in my pants, just like Harriet.

(While searching for a relevant link for Harriet the Spy, I came across this amazing NPR article titled “Unapologetically Harriet, the Misfit Spy,” which is an awesome read.)

Jonathan Ames is the more realistic yet still fantastical version of our childhood spy Harriet. He drinks white wine, puts his private detective ads up on craigslist (because he’s a struggling writer) and gets himself involved into some good old-fashioned hijinks. Plus, his two best friends, Ray played by Zach Galifianakis and George played by Ted Danson, are so, so cool.

There’s something so sweet and well-intentioned about the show. All three of the men are smart, talented and good to each other. It’s a healthy and refreshing counterpart to the suffocatingly male-stereotyped days of Entourage.

Boy, girl, billy goat, whatever you are, you’ll like this show. If you haven’t seen it, you must give it a try!