1. What’s the music scene like in Toronto? Is everyone in a band? Are people really nice there? How’s the dating?

Yes just about everybody is in not just one but often a few bands. It’s pretty saturated with artists here in Toronto. The key is to find some likeminded people and show support for them. That’s kind of the law in the Toronto music scene. To be honest I’m not crazy about the local music here but there are some decent bands. Just nothing that really does it for me the way my favorite bands do.
The people in Toronto are pretty nice as a rule. We have a reputation for politeness but truthfully we’re not the warmest bunch. We can be a little standoffish. At shows not a lot of people dance. It’s improving slightly though.
I’m the only single guy in the band right now but I am not much of a dater. I do chat up girls here and there but I usually get too drunk to get anywhere. I mostly just stare and grab the occasional bum. I am taking a stab at online dating but I couldn’t really say as I have been mostly dating myself for the last 2 years.

2. How was the Autumn Stones formed? Where did the name come from?

I founded The Autumn Stones in 2009 from the ashes of my old band The Assistants. I pinched the drummer and then met the original bass player later on. The original idea was for us to not really be a band but just do 1 album and to try to avoid all of the typical band hassles. It was really meant to just be a recording project. But after the first record I started writing better songs and wanted to keep it going and see where things could go. Our lineup is completely different now and we’ve started to embrace playing live a bit more. We’re anxious to get back in the studio though. That’s my favorite part of being in a band. I think it is the true measure of how good a band is. At least it has always been what’s most important to me. I used to have vinyl copies of The Stone Roses first record and Guided by Voices Bee Thousand on my bedroom wall to remind myself what it’s all about.

The name of the band comes from a song by The Small Faces called Autumn Stone. It’s a nice little tune. I’m not a huge fan of theirs but have always liked that song and thought it would make a great band name since I was 19. I tried getting a few of my older bands to take that name but it always got turned down by other members. So, instead I stared my own band called The Autumn Stones and then found members to be in it. That’s the way to get your ideal band name. I’m not sure what it means to be honest. I know that Stone Henge has a winter and summer stone and that it was likely used as a primitive calendar by ancient people. I suspect that The Small Faces may have got the idea from Stone Henge but I’m not sure. For me the name evokes something melancholic or nostalgiac in me. Also it implies something that lasts a really long time but not forever.

3. Who are your favorite artists and which artists influence your work most?

My favorite artists are The Magnetic Fields, Galaxie 500, Guided by Voices, Echo and the Bunnymen, The Smiths and The Stone Roses. I’d say all of those bands have had a big influence on the writing given that I write all of the songs. I’m influenced a lot by what I read as well. A great deal of my lyrics deal with religion and many of my favorite writers such as Christopher Hitchens and Sam Harris have inspired much of my lyrics. We have a new unrecorded song called End of Faith which gets it’s title from the book The End of Faith by Sam Harris. The lyrics to that song are kind of a response to the line in Lennon’s Imagine where he says to “imagine no religion.”

5. Tell me about your new album “The Escapists”. Does it relate back to your first release “Companions of the Flame” or does it move in a totally different direction? What was the inspiration behind the title “The Escapists”?

The title “Escapists” is culled from the lyrics of one of our songs called Ooh La La. The line goes; “Hey girls, let’s unwind entwined. Lace and pretty face, escapists.” I think it works as an album title because a lot of my lyrics deal with things that could be construed as forms of escape or evasiveness. I suppose this has come up in a lot of the stuff I write. Human beings are dreaming animals. So much of what we do is related to our imaginations. We listen to music watch tv, movies, read, observe. We seem to spend most of our time imagining, dreaming or planning more so than doing things. I use the term escapists ironically because I think it is so much a part of being human that it isn’t really escape. It’s the thing that humans do best. We imagine and plan our environment better than any other species. So, “Escapists” is everyone although ironically it isn’t really escape since these things are just what we do.
“Escapists” is a little different from “Companions of the Flame”. “Companions” had more optimistic love songs because I was in a more optimistic place in my life whereas “Escapists” is a bit lonelier, darker and a little heavier too. The songs deal with religion, sex, death, alcoholism. It’s juicier. I am really looking forward to getting into the studio to record these songs as we have spent a long time working on the arrangements and have higher expectations this time.

6. You were asked by NOW Magazine to cover Feist’s “One Evening” for their (really awesome) 50:50 video series (Check it out here, it’s really cool project where new local Toronto bands cover songs from the 50 best albums to come out of Toronto). Even though the covers aren’t completely finished yet, which one has been your favorite so far?

I’m going to be a jerk and say us. I just thought that her song was probably the best on the list and I think we did a decent enough job of it. Also, I’m not a big fan of many of the records on that list and haven’t heard many of the covers. Sorry Now. I guess I’m kind of a music snob that way. Although I should give an honorable mention to our friends The Whirly Birds who did Blue Rodeo’s Rose Colored glasses. I do have a bit of a soft spot for Blue Rodeo and Pete Carmichael did a great job singing that. He has a really rich and distinct voice.

7. If you were held captive by a bunch of pre-teen bandits and forced to give the Autumn Stones spin on one Justin Bieber song, which song would it be?

I honestly can’t name a Justin Bieber song but I can do you one better. I would proceed to sing a song I wrote on Halloween a few years ago when my brother who is 6 2″ dressed as Justin Bieber for Halloween. It’s called “Me and the Beeb” and it is awesome and had everyone at the party singing along. One of my finest hours.

There are just so many questions surrounding the puzzling fact that Avril Lavigne is STILL GETTING PAID TO MAKE MUSIC. A modern day “Who killed Kennedy” of the pop music world if you will, except the exact opposite. Who the fuck is keeping her alive? And WHY GOD, WHYYYYYYYYYY?

I’ll admit I was totally into her song “Sk8er Boi” in middle school, cuz I remember taping it on a cassette tape from the radio and listening to and jumping around my room every night before bed. She totally fit into that anti-Britney/Christina/Jessica mold that was puking blonde highlights and belly button rings into everyone’s eyebalss in the early aughts. Avril made sense back then from a marketing standpoint: grab the attention of the girls who don’t look or act like Britney/Christina/Jessica and give them Avril because they don’t know who Blondie is yet. MONAYZ. Got it.

It is now 2013. And for the past probably 6-7 years of popular music, I am always SO CONFUSED as to why she is STILL releasing songs. Here are some thoughts:

Take a listen at her new Max Martin produced song called “Rock and Roll” below. It’s not horrible from a music standpoint because Max Martin is a pop music genius producer and can do no wrong. But Avril, really?! Still harpin’ on the faux punk “fuck the system, I’m rock and roll” pop canadian princess thing? WHY HASN’T ANYBODY TAUGHT HER WHAT IS COOL. She’s almost fucking 30. Drop the faux punk shit, plz. It’s so embarrassing! There are ways to still look edgy without pretending to be 17 and afflicted. Just ask Kelly Osbourne. Or (cringe) Pink. She manages to not look like a fucking idiot, puts on a fascinating pop trapeze show, and releases non-vomit inducing pop music. Or, you know, you can ask literally anyone who is 30, looks cool and isn’t Chad Kroeger. 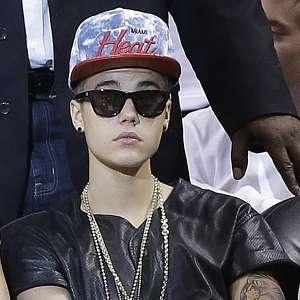 I love this outfit. That leather shirt is rad, gold chains are always fun and the hat adds a little team spirit. You can take away someone’s self love by booing them in extremely public places, but you can’t take away their style! Way to go, Biebs. Werk that leather shirt n gold chains. And be good plz.

NOW Toronto (a magazine and online cultural publication) is doing this really, really cool project called 50:50. It consists of 50 bands in Toronto covering 50 tracks from Toronto’s greatest albums. It is an insanely great project to celebrate music born out of an amazingly musical city. Not only do new, up and coming bands gets exposure on a grander stage than the usual local hangouts, but accomplished stars get honored with covers of their hits. Plus, fans of music get reworked version of their fave songs. It’s a win-win-win. (Someone in Minneapolis should set this up for us ASAP!)

The video above is of The Autumn Stones covering Feist‘s “One Evening”. It’s a really cool horn-infused cover of her song that you would love to hear in a small jazz club, preferably drinking wine with someone who can pull off wearing a fedora. Dreams! Plus The Autumn Stones are cute dudes with probable Canadian accents ready to woo you with smooth tunes and whatever pickup lines are hot in Toronto. Rad.

Check out all the videos so far including covers of Drake, Barenaked Ladies and Neil Young, and check back for upcoming covers of my personal faves from Canada-Peaches and Crystal Castles! (There are bruises all over my legs still from the Minneapolis Crystal Castles show last week. I spent 30 minutes in the mosh pit. Awesome show!)

And just for fun here is Feist performing “One Evening” live: