Good GOD. I love summer songs. They are full of life and love and sex (maybe, probably, HOPEFULLY). The first time I heard Olly Murs’ song “Troublemaker” I instantly loved it. It’s a refreshing move away from the synth-crazed hits of the radio over the winter. Plus there is not even one note in any of the melodies that is questionable. It just winds around the simple yet full instrumentation so sweetly. Plus PLUS Flo Rida adds a little FLORIDA FLAIR (oh god) making it a perfect A+ summer hit. Extra points for have a strong-willed female in the vid. 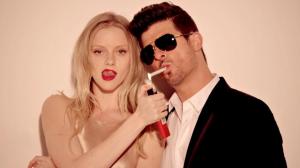 This song is pure sex. Robin Thicke is hot as FUCK, Pharrell is awesome and I guess T.I. is okay. Along the same lines as “Troublemaker”, the instrumentation is simple yet compelling and PHRESH because it’s not the same electro stuff we’ve heard for the past billion years on the radio (don’t get me wrong I love electropop but JESUS, instrument diversity is cool too RADIO). This song is just so fun. You can’t help but move around to it, and maybe kiss ur honey in the process.

ok he was close

tried to domesticate you

but you’re an animal

Baby it’s in your nature

just let me liberate you

One terrible part of loving pop music is the antiquated and rather dull views on gender roles and sexuality. A woman who was unhappy with a controlling man should let you liberate her because she can’t do it herself? COOL STORY BRO. NO, REALLY. I’m so glad another mainstream pop/r&b artist has written a song alluding to the fact that women can’t think for themselves. Real neat. SO 2013.

The uncensored video is kinda really fuckin lame too. I mean, it’s pretty and well shot, but super objectifying and YAWN. It’s full of topless and naked models with fully clothed men. Hey, here’s an idea dudes: why don’t you stop being so insecure about your stomachs/biceps/dicks/manhood and flop them around for a change? IDGAF if it isn’t as pretty as women being naked. EQUALITY MOTHAFUCKAS.

I know it’s a pop song and it IS a fun and catchy tune. But sometimes it’s still hard as a human, who respects not only herself but everyone regardless of gender, to hear lyrics that once again play into gendered stereotypes of sexuality, i.e. men are strong and women are weak. PUKE. All it tells me is that Robin Thicke and co. are living in a fantasy world where they think women need men to save them from other dudes cuz we can’t make a decision for ourselves. EW. YUCK. We’re all just human beings, man. Cut this gender shit out. It’s SUCH a bore and pretty intellectually embarrassing.

A- SUMMER HIT because the music is awesome but the lyrics are so 1873.