The latest episode of Girls was fucking AWESOME. Definitely the best one of the season so far, because so many “WHAT THE FUCK!” moments happened, and they were totally golden. Here’s what went down: 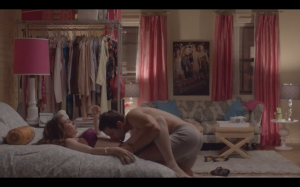 Girlfriend meets some dude she went to camp with, and makes plans to hang out later. A movie turns into a boner (obvi) and they wind up half naked on her bed. As this is her first sexual experience, I’m assuming, she felt very awkward when he went down on her, and just wanted to have sex. When she confessed that she’s a virgin, he stopped and was all “I don’t do that shit, because virgins get attached and they bleed.” #RUDE!!!!! What a dick. Get over yourself. Hopefully Shoshi gets what she wants from a nice dude not hung up on womanly stereotypes.

The episode starts off with Hannah receiving a text of her kind of bf’s penis wrapped in some kind of fur. Then she gets a text that says “sry not for you” with “sry’ spelled exactly like that. Gross. Despite her roomies best judgements to not text him back, she texts him a picture of her boobs. Later on, after talking to her coworkers, they tell her some serious truths like ‘that shit is fucked up,’ ‘ew’ and ‘you need to leave him like right NOW’.

Also at work, Hannah’s new boss is suuuper touchy, but nice and buys people stuff for putting up with his touchy-feely fingaz. Conundrum! She confesses this to her new gal pals at work while they give her some disgusting new penciled in eyebrows that make her look silly. While she’s at her kinda-bfs house, she tells him everything she SHOULD be telling a fart stain like him. It’s amazing, until he thinks it’s hot and wants to make some luv. Screaming at the TV “DON’T DO IT HANNAH” doesn’t help, as she totally effed him. Sex is a tricky bitch.

Absolutely my least favorite character. She gets pissed at Hannah because Marnie’s boyfriend READS HANNAH’S JOURNAL (seriously, that’s your own painful fault. You don’t read other peoples’ inner thoughts, like AT ALL.) and writes a song for it at some empty, shitty show they’re playing. The words go something like “He has a vagina/ Marnie needs to get fucked by a real cock/ He’ll find someone who likes his smothering love.” Marnie THROWS HER DRINK at Hannah and calls her a bitch. WHAT THE FUCK! It’s not her fault she wrote down privately that your boyfriend is spineless and neither of you are strong enough to cut the dependable sex cord and breakup. #turdcouplealert

She’s still a nanny. Her ass looks good in this episode because she has cool pants on. I really hope we get to see her out at a club and shit sometime, telling some guy what’s good, because this nanny shit is realistic but boring.