Marina and the Diamonds “Electra Heart”

If you can imagine what Barbie would be listening to in her lumped out jeep, it would be this album (which gives Barbie a lot of cool cred but let’s face it, bitch was fierce).

I AM OBSESSED WITH “Prima Donna” by Marina and the Diamonds. It is the most beautiful pop song that is SO POP that I’ve heard in a very long time. Pop music has definitely taken a more electro/dubby route in recent years. Which I don’t really have an opinion on right now because I haven’t had coffee yet. I also realize I’m about a fucking DECADE late hopping on the Marina train. Whatevs, I work through pop stars on my own time bc I Am Not A Robot. 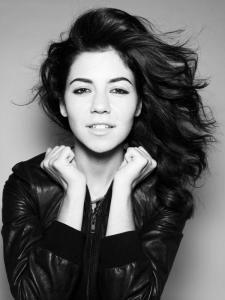 My newfound Marina love began when I finally burned a new CD for my car after months of listening to weird mixes and Taylor Swift’s “Red”.

(It’s really fun to discover new favorite music in your car, especially if you live in a big city. Traffic is kind of like an album anyways. It gets slow, you get stuck behind big trucks and you’re outraged, or you’re driving super fast on the highway and blasting anthems.)

Anyways, my favorite tracks from Marina’s Electra Heart are hard to pick because I’ve only been obsessively listening to the album for 3 days (granted the first day and a half was spent with “Prima Donna” on repeat and feeling invincible). BUT early favorites are: Teen Idle, Radioactive, Sex Yeah, Valley of the Dolls, and Bubblegum Bitch.

Pop music and escapism vs. reality

I love Marina’s take on pop music. Electra Heart is one of the most poetic pieces of pop I’ve ever listened to recently. Not because she’s trying to sound poetic, but because that is the way she writes and the art that she wanted to make. If Marina truly wanted to be a “pop star” in the traditional sense that we know them to be, she’d have worked with Max Martin and adopted some sort of British Ke$ha persona. However it’s easy for many people/audiences to forget that pop stars and pop music don’t have to come out of a machine: they can come from the heart too.

What’s refreshing about independent/artistic journeys like Marina’s into pop music is you get the lyrical depth that is absent from mainstream pop/dance music. Sometimes it’s great to yell “Mazel Tov!” “Tonight!” or “Dance!” when you want to be enveloped in the total escapism pop music gives you. Shallow pop music lyrics have a purpose, because ain’t nobody want to contemplate their shitty relationship or societal woes on a Friday night dancefloor. But when it comes time to feel again, you can say hello to Marina or Lana Del Rey, where you too can contemplate love and life like a normal, suffering human being.

Check out her soundcloud here because it’s got a lot of songs and remixes up. But I like her originals better than most of the remixes up on her page, except this Passion Pit remix of “I Am Not A Robot”.