I LOVE the Puppy Bowl. I think it’s one of the most genius things Animal Planet has ever done. Honestly. If you haven’t watched the Puppy Bowl because you’re a diehard football fan, or your just haven’t ever seen it, it will change your life. Not really, but it’s the cutest thing in the entire world.

First, the puppies are on teams and run around a small “field” with a chew toy football trying to “score points” (run around like puppies and look cute). Sometimes there’s pee, I’m sure there’s been a poo or two, but that’s just part of the fun.

Then, at halftime, the most amazing thing ever happens: The Kitty Halftime show. Kittys are placed on the field with kitty-like toys, but they all look frightened and pissed off and basically don’t do anything but hiss at things. It’s so joyous!

The animals are all provided by animal shelters that deal in pet adoptions. So not only is the Puppy Bowl amazing, but it also promotes pet adoption to (hopefully) loving families. What’s not to love!!! 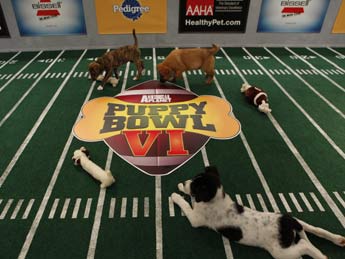 One thought on “Puppy Bowl VIII: What Super Bowl Sunday is really all about”