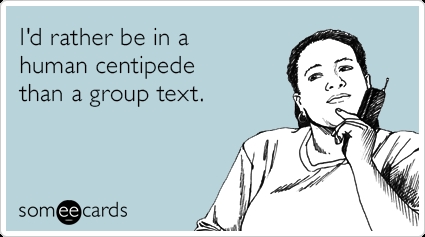 If you’re a human being with cell phone contact to the outside world, you’ve surely come across a group text. You know, the kind between your roommates updating each other on visiting guests or griping about how dumb it is to pay rent. Or the ongoing thread between close friends where you share ridiculous posts of people you used to go to high school with. But there’s another kind of group text out there lurking behind the matrix: The Event.

The event group text is something you get informing you about-DUH-an upcoming event. Maybe your friend is coming back in town and has texted you along with 9 other numbers that are foreign to your phone’s contact book and thus your IRL social network. There’s nothing wrong with sending or recieving a group text like this: the sender wants to get a quick, informative message out to a select number of people. Efficiency at its best in the modern age. However, it’s how the recipients act that can make this particular group text a pleasant stroll in heaven or a boiling soup of textual hell.

Most of the time, it is an unwritten rule that you don’t have to respond to a group text of this nature. “Hey everyone. Party tonight. 11pm. My place. BYOB. PEACE SUCKAZ” is pretty straight forward. But there’s always a couple of dinks who responds to the entire anonymous group of folks with either a useless “wooooo” or a vacant “k”. Stop it. Stop it now. You’re flooding the inbox of people you don’t know with useless responses, and setting them up for the falsest hope we could ever imagine in this cold, dark, dependent technological world.

When I hear my phone sound off with a text, it sends me into endless possibilities of heavenly plans. Maybe it’s that sexy beast asking me out finally. Maybe my mom sent me a picture of the family dog. Maybe my friend Jeff is finally out of his existential funk and wants to get some cheese fries! But no. It’s still the empty responses from the group text sent an hour and a half ago about the party that had all the information possible in the lead text. The same empty group texts that transform faces around the globe from sheer excitement into gray-tinged smart phone-induced disappointment.

Of course it’s not the end of the world to recieve these kinds of texts, but that doesn’t mean it’s not annoying. If anything in this world full of murder, chaos and Kim Kardashian: Hollywood addicts, lets try to bring the daily annoyances down a little. Who knows, you might save a murder someday by refraining from texting “k” to a group of strangers. So next time you get a group text, do the right thing. Either accept it with a symbolic nod of your IRL head, or open up a new little text to the OT (original texter) and send your jubilations or follow up questions there. You could be saving a life.